According to the market report published by Future Market Insights titled ‘Women’s Footwear Market: Global Industry Analysis 2013-2017 and Opportunity Assessment 2018-2027,’ the revenue generated from women’s footwear is estimated to be valued at over US$ 152118.8 Mn in 2018, which is projected to increase at a CAGR of 4.2% during the forecast period (2018-2027). 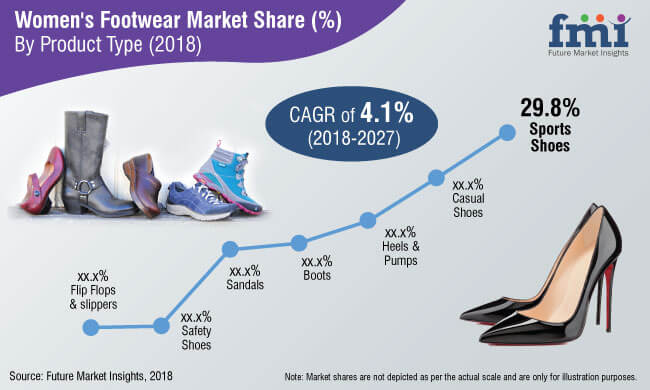 In the global women’s footwear market, companies across the globe are focusing on research & development as well as the launching of new product variants, which is a key factor driving the demand for women’s footwear across the globe. Companies operating in the women’s footwear market are constantly making significant investments in research and development activities to cater to the evolving needs of customers seeking authentic and specialized products. Women’s footwear has standard features such as style, comfort, basic functionality, and durability. Moreover, companies are also launching women’s footwear with added benefits such as soft sensors. Soft sensor network circuits or flexible sensors are embedded into the insole or the upper sole to measure data, which is then programmed and sent to an external device such as a watch or a smartphone. This technology is effective in monitoring injuries and even greater complications such as diabetes and others, owing to which the women’s footwear market is expected to witness significant growth.

Request a Sample Report with Table of Contents and Figures: https://www.futuremarketinsights.com/reports/sample/rep-gb-8031

Increasing focus on sportswear is one the major drivers of the women’s footwear market owing to the rising demand for comfortable footwear and growth in the number of sports activities. Due to advancements in technology, different international brands are merging sportswear with fashion wear. Increasing concern about health and fitness is encouraging female consumers to indulge in more sports activities, which has boosted the demand for women’s footwear.

Our advisory services are aimed at helping you with specific, customized insights that are relevant to your specific challenges. Let us know about your challenges and our trusted advisors will connect with you: https://www.futuremarketinsights.com/customization-available/rep-gb-8031

The global women’s footwear market is segmented on the basis of regions, which include North America, Latin America, Asia Pacific Excluding Japan (APEJ), Western Europe, Eastern Europe, Middle East & Africa, and Japan. Among all the regions, North America and the Asia Pacific excluding Japan regions are estimated to have a substantial value share. In terms of growth, APEJ is expected to witness a robust growth of 5.7% during the forecast period. The APEJ region is expected to gain an incremental dollar opportunity of US$ 25731.2 million during the forecast period.